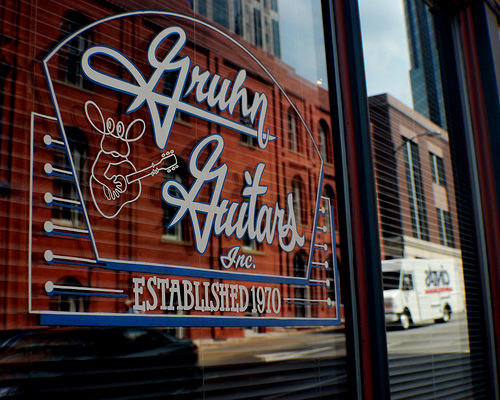 Iconic guitar shop, Gruhn Guitars, will soon relocate from their longtime home on lower Broadway to the up-and-coming Eighth Ave South neighborhood.  Owner, George Gruhn, has sold guitars from his shop at 400 Broadway for 42 years.  According the Nashville Business Journal, Gruhn sold the property to Ruble and Brenda Sanderson for $4.8 million and purchased the Eighth Ave. building for $2.18

Why is Gruhn moving after spending nearly 50 years selling guitars on legendary lower Broadway?  According to the Tennessean, Gruhn is fed up with Broadway’s atmosphere.  Gruhn explains his reasons for moving to Nashville Business Journal reporter Nevin Batiwalla.

“The neighborhood has changed…It’s not the neighborhood my business grew up in.  It’s become a mix between a hillbilly Bourbon Street and Daytona Beach at spring break, but every day.  It’s not a pleasant place to look around and try out guitars.  I just don’t fit in the middle of a honky-tonk district.”

In a quote given to the Tennessean Gruhn says that the continuous tourist traffic has hindered his business.

“This is an ideal location for beer, barbecue and Western wear,” he said.  “Having several hundred people a day to tour the shop … is an impediment to business.  They’re not bad people, but they’re not going to buy what I have.”

Gruhn plans to relocate within the next six months to 2120 Eighth Avenue South, a building formerly occupied by the email marketing firm Emma and the Nashville Scene.