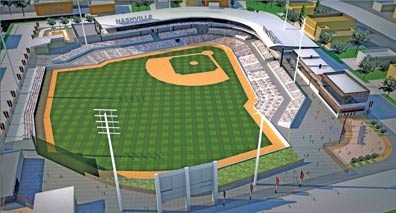 Prospective property buyers in Nashville need to catch wind, if they haven’t already, of the new hot spot forming right here in Music City.  Mayor Karl Dean is making plans to build a minor-league baseball stadium at the Sulphur Dell Site north of Jackson Street between Fourth and Fifth avenues for the Nashville Sounds.  A recent article published by the Nashville Business Journal discussed the pros and cons of the new stadium.  The author explained how, “The renewed prospect of a new Sounds stadium to replace the aging Greer Stadium has generated enthusiasm among baseball team leaders, downtown business owners, property owners, developers, tourism officials and several city leaders as a potential economic driver in an underdeveloped area.”  This excites us at the Horrell Company!

There is much speculation on whether the new stadium will be profitable for the city but from what we can see in the commercial real estate business this area will see the growth it desperately needs.  This area is already starting to see a boast in property values for property owners near the stadium.  Our advice to buyers looking to purchase office, retail, or residential space in this area is that now is the time.  Not next week or next month but immediately! The Gulch better watch out because Germantown has the potential to exceed all expectations and we are excited to see what happens.